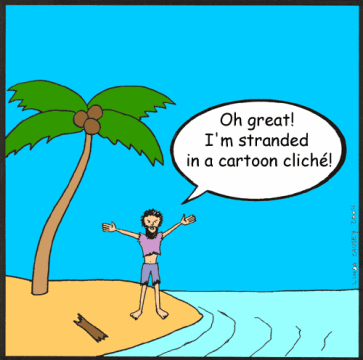 
As a writer in pursuit of something fresh and exciting I am often dismayed by the use of worn out aphorisms and phrases.   One of the most odious of the last decade has been the phrase ‘At the end of the day’ which is repeated by every radio talk show caller and host ad nauseam (another cliché!)
Doing a little research (and I stress ‘little’) I noticed that there are hundreds of them, possibly thousands, clogging up the English language like locusts.  How do you avoid clichés when everyone in the vicinity uses them on a daily basis?  As a writer the temptation to use them is big because a lot of them convey simple ideas that people can understand.   But really, most of these should be avoided in any kind of serious prose writing.   Here then is a list of the most annoying ones.  I only added the first few hundred because I was going ballistic looking at them all.
CLICHES TO AVOID AT ALL COSTS || Compiled by David Hunter
all walks of life
at all times
leave no stone unturned
lock, stock, and barrel
calm before the storm
long arm of the law
never a dull moment
cry over spilled milk
patience of Job
paying the piper
give the devil his due
selling like hot cakes
hook, line, and sinker
stick out like a sore thumb
winds of change
in the same boat
Awful, aren’t they? Here are some more. These ones are usually used to start off a sentence and are particularly irksome …


To tell the honest truth
As a matter of fact

With all due respect

At the end of the day
Absolutely
Some of them are unavoidable, right? I mean, there are only so many ways to start off a sentence.  But in prose writing I think it’s still possible to be fresh and original.  Here’s some more:

It's not rocket science.
It's a paradigm shift.
win-win situation
bottom line
thinking outside the box
wealth of experience
low hanging fruit
in a nutshell
put all the eggs in one basket
giving 100%
strike while the iron is hot
no brainer
turn-key solution
beat a dead horse
everything from soup to nuts
leaps and bounds
Ugh.  I’m feeling my stomach turn.  But I suppose we have to go on …
value added
be at peace with yourself (shut-up)
Flies in the face
I must confess to using some of these, but mostly in jest.  If I were to use these phrases in my daily life I’d have no friends left …
Cover your ass
You have no Idea how painful this is for me!  But, I’ll be a good writer and soldier on …
Don't eat the yellow snow
far be it from me
I’d like to insert something witty and urbane here, but I’ve lost my appetite …

talk 'till your blue in the face
Like a bull in a china shop
So you see, clichés are everywhere! We can’t avoid them completely in everyday conversations, but we can certainly avoid them in our writing.  Clichés are only weak, lazy language.  We can do better.  And please, if you catch me using a horrid cliché, just bust me in the chops!
(As a postscript, I will leave you with a few more horrendous clichés …)
Posted by TheWritersDen at 11:56 AM