The Underwood Effect || A Modern Parable about Old Technology ... 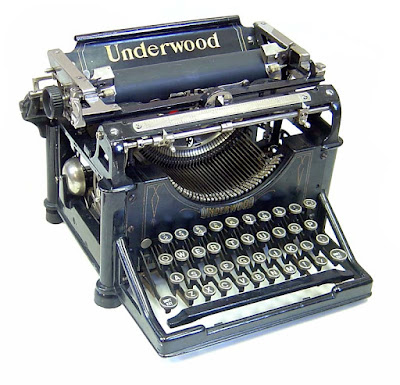 
“...Technology is a crutch. Dropping oneself back into a more primitive abyss is healthier for the mind ...”

Me and Jeff were sitting around one night working on our movie script when he suddenly stopped typing and looked at me rather quizzically.

“Tonight I shall forego technology” he announced. He got up and walked out of the room. Minutes later he returned with a large object in his arms.

“And what do you propose to do with that thing?”

“I am attempting to channel the spirit of writers past; Kerouac, Steinbeck, Hemingway. Can’t you feel it? The literary ghosts abound tonight,” he tapped a few of the keys and they made dull thudding noises that echoed off the walls. “Technology is a crutch. Dropping oneself back into a more primitive abyss is healthier for the mind.”

‘Hey man, whatever floats your boat” I said.

I went back to my Microsoft Word document hoping I could regain the flow I had lost. I was soon immersed in act two of our script, ‘The Last Death of Juan Diego’ when I noticed that Jeff hadn’t written anything yet. He was sitting at his No. 2 Underwood, staring at it.

He scratched his head for a while before replying.

“I think this thing needs ribbon. I’ll be right back …” he dashed off up the stairs. I could hear him making his way up to his parent’s attic. He was back not long afterward with some spools of ribbon that I assumed were for the Underwood.
I tried to ignore all the fussing and cursing Jeff was doing getting that ribbon in, and tried to focus on the script.

VO: Juan was dead. He had died a long time ago, but still walked the Earth; his eternal damnation for the murder of his friend Sanchez …

It had been an accident, or so he told himself. They both had been in love with the same woman, Maria Pacifica Ramirez ….

“Come on you whore…”

I looked up from my script, and saw Jeff trying valiantly to install the typewriter ribbon without causing damage to the machine. His face was the color of plums.

“Ah! There we go!” he said, smiling. The shift from complete anger to happiness was comical.

“Will you actually be writing now?” I said.

“Of course … I was just putting in some fresh ribbon”

“Relatively fresh.” He said. He sat down in front of the Underwood again. He started hunting around for some paper to feed into the thing.

“Ahem,” I grunted. I pointed over to the shelf, where sat a sheaf of photocopy paper.

I turned my attention to the script again:

Juan Diego is walking through the desert somewhere in the American Southwest. He lost his horse in a shoot-out with the Federales and now is on the run. Up ahead, almost to the horizon, he sees a band of men on horseback, headed straight for him. He pushes his Serape aside, and un-holsters his pistol …

For a moment I was confused by the sound, but it was the damn typewriter. It sounded like someone was getting punched in the face because it was echoing through Jeff’s wooden desk.

I told him it was called ‘white-out’ and that it was in the desk drawer. He rooted through the drawer for a few moments before he found it in the back. He was all happy again.

“Are you feeling the Kerouac vibes yet?” I said.

He ignored me, except to say “Oh ye of little faith”

I looked at my Word Doc, and felt the flow had dissolved. I went outside on the front porch to have a beer and take in the night air. Kerouac? Was he kidding? How anyone could write on one of those contraptions was beyond me. I soon forgot about Jeff and his nostalgic leanings, and looked up at the stars. Orion’s Belt was visible … so was Arcturus, the Great Bear …

I swear, they should melt every last one of those things down and turn them into Coke cans or something ….

Suddenly the typing stopped again. It remained quiet for some time, until I got curious and decided to wander back in.

Jeff was still seated at the Underwood, staring. When I got closer, I saw that he had one finger trapped between the K and L keys. He had notoriously fat fingers, so I assumed he couldn’t get them out.

“Can you see if there’s any butter in the refrigerator? “ He said sheepishly.

After searching the fridge and finding no trace of butter or margarine, I returned solemnly to Jeff with a bottle of Ketchup. He took one look at the bottle and sighed.

I managed to apply said Catsup between the keys and his fingers with a cotton swab, and all the while Jeff is moaning that the Underwood was being ruined, that Hemingway never got his fingers caught in his typewriter, and that he was a worthless hack who would never get published and didn’t deserve to be called a writer. I told him to hold still or I’d leave him there stuck to the Underwood until all that was left was his skeletal remains.

“There, try it now” I said, looking at the keys awash in ketchup. He tried tugging his finger gently, but nothing happened; Still stuck.

“You have to put some effort into it, man” I said. I grabbed his wrist and yanked. Jeff produced a sound similar to a walrus giving birth.

Now I was angry. I picked up the damned typewriter.

“What are you doing?” Jeff asked nervously.

I yanked back on the thing and it unexpectedly let go, causing me to careen backwards where I promptly and unintentionally sent the No. 2 Underwood sailing through the window and, to my surprise, through the windshield of his father’s Buick Century. The crash of glass echoed up and down the quiet suburban street; lights flicked on, people came out to stand at their front doors. It was like a scene from that old twilight Zone episode ‘The Monsters Are Due on Maple Street.’

We stood at the window frame and looked down. There, in the front seat of the Buick sat Jeff’s beloved Underwood. It was no worse for wear. I had hoped it would be destroyed beyond repair. No such luck.

Ten minutes later Jeff had retrieved the infernal machine and placed it back in the attic, where it belonged. He came back into the room quietly, and opened up his laptop. His eyes dilated.

“What happened to the ‘primitive abyss’?” I asked.

He never answered me. He was busy checking his e-mail.
Posted by TheWritersDen at 11:55 PM