Into the NaNoWriMo Fray! 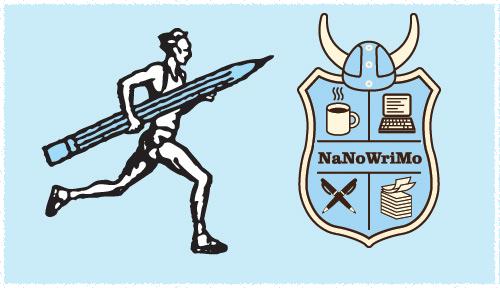 I’m one of those writers who will catch on to things either too early or too late. In the case of NaNoWriMo (which sounds like gibberish to the uninitiated, but actually means National Novel Writing Month) I had largely ignored it until this year. The thinking was, ‘do I need a writing event to actually get something written’, and the answer is no. However, there is an intangible here; being left out of something so fun just sucks. How can a real writer ignore all the scribbling going on? Who can resist a challenge of writing 50,000 words, or 175 pages, in a month? I guess it’s all about being part of something, it’s about the experience, isn’t it? Besides, I was bombarded with people talking about the damn thing and I guess I’m weak-willed.
So I shall jump into the fray, food and rest be damned, and I will attempt my 1666 words a day (yes, I worked it out, do you mind?) and see what happens.
Scrabble! I Capitulate …

I got my ass kicked at Scrabble.
That’s not an easy admission; I pride myself on being a wordsmith, but the other night I was thoroughly trashed by my family at a get together. I mean, I came in DEAD LAST! Ego bruised, I sulked for a while, wondering how this could happen to a writer. I have a large vocabulary! I’m intelligent! What’s the deal?
The cold fact is, Scrabble is not writing. A lot of factors come into play:
You have spelled out the word Exhaled with the letters on your little plastic Scrabble Tile holder, waiting for the three goofs ahead of you to take their turn (and they are excruciatingly slow) and you KNOW someone’s gonna take the exact spot you need to get 110 points. They take the spot, and score 110 points.
Sometimes you can’t spell anything with I I I E E E A
No less a complex action than plopping two letters down precisely at the crux of two existing words thereby yielding points from the now three words is quashed when a Q abuts a P rendering the whole operation void.
Generally I suck at anagrams, which is the basis of Scrabble. The letters W G S A A R O are hieroglyphs to me unless I really concentrate … (Gas? Wags? Grows? Swag? Wroaags?)
Panic: Sure I can spell HAT and SPOT with my letters and settle for 3 points, but panic over my low score leads me to obsess and go all Captain Ahab in search of the perfect word which will lead me to Scrabble Nirvana: Triple Word score! So I sit and concentrate on those lovely blue spots on the Scrabble board … points! Victory! Huzzah! I lose! (Plus, when I do get a chance at a triple word tile, I only have the word HAT to place on it)
Playing with people who have a repository of ridiculously obscure words can only cause heartburn and paper cuts as I peruse the scrabble dictionary at a lightning fast pace in order to quash the word WELK that the guy ahead of me puts down between two other words and on top of a triple word score. He says it’s a fish. I say it’s a dead band leader’s name and is inadmissible. He wins.
When in doubt use the word Qwijibo: meaning ‘A fat, dumb, balding, North American ape with a short temper’ while no one is looking.
After I’ve been staring at a triple word score square for a few turns, I get ready to place my word Xenon on it, thereby netting me the bragging rights to the title of Unquestioned Lord and Master of the Scrabble Universe, only to have the guy ahead of me place the word HAT in my spot.
More NaNoWriMo stuff …
Okay, here is the info for National Novel Writing Month, Thirty Days and Nights of Literary Abandon …
National Novel Writing Month is a fun, seat-of-your-pants approach to novel writing. Participants begin writing November 1. The goal is to write a 175-page (50,000-word) novel by midnight, November 30.
Valuing enthusiasm and perseverance over painstaking craft, NaNoWriMo is a novel-writing program for everyone who has thought fleetingly about writing a novel but has been scared away by the time and effort involved.
Okay, gotta go. It’s scribble time (Not Scrabble, Scribble. Ugh …)  Lemme know about your NaNo adventures.  Keep in touch, and remember, you gotta just Shut Up and Write and everything will be alright.


Note: Don't forget to check out the Campfire Halloween Special; lotsa creepy stories submitted by some good friends of mine, along with some time-honored classics of horror ...
Posted by TheWritersDen at 1:46 PM