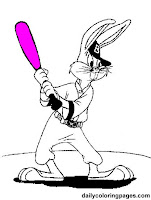 The day started out innocuously enough; the employees at our company started trickling in to Crooks Field for our annual company picnic and soft-ball game about 10:30 AM. When I got there some of the guys were already peppering the outfield with fly balls and line drives. Even at my advanced age (37) I still turn into a little kid at the sight of a ball field. I grab my glove and trot out to catch some warm up drives, grinning like a child. Fisher and Robert are just flaying that ball; it’s sailing out over my head even though I’m deep into right field. Oh no, I think, what have I gotten myself into here? These two guys are just lacing them. Memories of ball games past creep into my soul; I’m not the greatest player who ever trod the diamond; and I always ended up on the losing side! I anticipated a long day out in the field and not much at-bat time.

As balls are flying overhead I point my nose to the sky like an Irish Setter; I sniff the air, watch the clouds; there are calls for rain today, but so far signs of the advent are minimal. But it’s cool out; something in-climate is on its way. I can tell. Soon the BBQ appears, and the aroma of smoking hot dogs and hamburgers fills the air. Ken, from engineering, is at the helm of the grill. He’s not playing today; he doesn’t play baseball, but was recruited to cook. He seems to be enjoying it though. There’s also boxes of Tim Horton’s donuts everywhere; the kids are digging in to them and absconding with all the chocolate ones. We’re eating Red Hots and swatting Wasps. We’re laughing; nay, bonding?

It’s a small crowd; we barely have enough players per side. It’s good though; more at-bats for us. The two Captains Jay and Tony read out the rosters. True to form, the other team gets the real heavy hitters Fisher and Robert. We get George the Janitor. George is a little slow, tall and awkward. He can’t pitch, hit or throw. I get déjà vu; throughout the history of sandlot baseball there’s been a George on every team. I resist the urge to feel sorry for him, but he cuts such a pathetic figure. I try to encourage him however I can, but he looks nervous. Every second there appears panic in his eyes. He wants to belong, I can tell. I can also tell he’s scared out of his wits.

First inning goes well; each side scores three runs. I’m surprisingly good at soft ball; it’s the oversized medium; the ball itself comes at me like a large meat ball and is easy to hit. Not so easy to get it into the outfield though. I get to first. Tony, the company’s Director of Operations, is a short guy with a mustache, portly, but he’s adept on the base paths; I barely get to first before he tags me. Safe.

The next few innings go this way. In the third I ride an infield double to second base, when Winston in center field throws the ball over to second, right at me! I jump up to avoid, you know, smashed nads, and the thing hits my ankle bone. I go down like a heap, laughing actually. I feign hurt, and then I get up and run at Winston; play fight. Everyone’s laughing. George hits and bloops to first base. The inning is over, and I hobble to our dugout.

We’re keeping pace, but these guys keep scoring and getting ahead. We are playing catch-up constantly. Fisher gets up to bat; he’s an East-Coaster from Cape Breton, he’s bald, has no front teeth, and his face is red as a Beet. He has a large grin across his face. He’s pointing to me in right field! He intends to hit one out here to me. But his plan doesn’t work; he chokes and pops up. Next up is Robert. This guy is good. The outfield is chattering “heavy hitter! Heavy hitter!” and moving over to the left, because that’s the direction he hits, but he knocks one right to me. It’s a deep drive, up high; and like I said, the damn thing’s a giant meatball; I catch it with ease. Inning over. Robert trots over and says “good catch. I hate you!” He’s smiling, he still can’t believe it.

5th inning. My arm is getting sore, and my ankle is swelling. We’re fading; down by 7 runs. Dean says “screw it” and picks up the little pink bat that is lying around in the dug-out. It’s rather humorous because Dean is a large man with a slight paunch holding this thing. Everyone is laughing; it relaxes us. He swings, and piles one out deep into right field. Homer. We all cheer! Jay is next. He says screw it too, and picks up the pink bat. Wham! Pow! Line Drive. He’s on first. My turn. Wham, pow! I line it over third. I’ve confused the pitcher because I switch hit to my left, plus he’s laughing about the bat. We score again. Now everyone is picking up the pink bat. The chant “Think pink! Think Pink!” is rising from our ranks. The little pink bat has become our rallying point. We end the inning down by only 4.

7th inning; there is no stretch; we must finish the game at this point because it’s starting to drizzle. Two out’s already, and Robert, the heavy hitter, get’s up to bat for the other team. He’s looking right at me in right field. Pointing! He smashes one out towards me; it’s hanging up there, seemingly in the clouds, but the large ball is too easy to miss. I catch it and I yell in excitement! We’re up to bat. Robert has that look on his face again. I got your number, I say. He still can’t believe it. He thought he had a sure homer.

Think Pink; George gathers up our special bat. I tell him he’s hitting okay, but he’s not running fast enough to get to base. He listens. He manages to drive one off and he scampers to first. The little pink bat is at it again; we load the bases. Our man in Human Resources, Rocky, dressed in full 19th century baseball regalia, long stockings and all, steps up to the plate.

It’s a long drive to center field; it out distances all the outfielders. One, two,three, FOUR RUNS! We all celebrate, even though all we’ve managed to do is tie the game. The rain prevents any extra innings, so we all grab the trophy and huddle around for a picture, both teams. Someone grabs the little pink bat and hands it to Rocky, the game’s hero. He holds it, grinning like a fool.

It’s an amazing instance when the old axiom “anything can happen in baseball” really comes true; anything really can happen, if you believe. We were down and beat, 7 runs behind, and this little pink bat picked us up and hauled us to our feet to rally and tie the game. Looking at all the tired faces around me, I could see that something special happened. We all knew it; we didn’t have to say it.

It was that damn little pink bat. 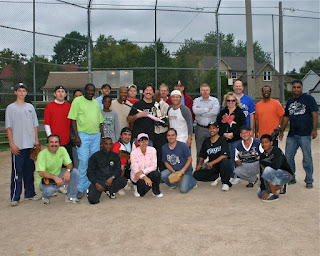 Here's me at first; I have a maniacal look on my face because I'm trying to lead off and steal a base... 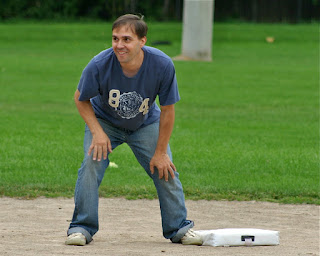 Posted by TheWritersDen at 1:51 AM