Why I Blog: The Sordid Details
Part Zero || David Hunter 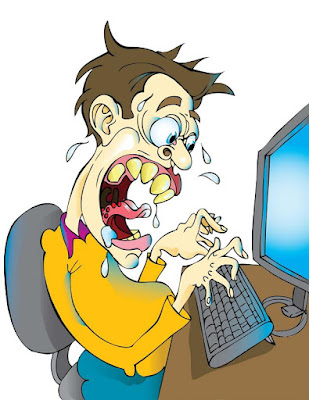 A blog is a personal diary, a daily pulpit, a collaborative space, a political soapbox, a breaking-news outlet; memos to the world. ~ Anon

When I was a kid I used to make my own newspapers; I’d cut out pictures and paste stories together. My mom thought I was nuts. In High School I joined the school paper, drew comics, and wrote stories. I guess I wanted to show everyone I was a genius or something.

With the advent of the blog, I finally had an interactive audience, a readership. I had a gauge for my writing other than Uncle Harry who always spilled beer on my stories.

Having a blog is an eye-opener, let me tell you. Stories you thought were masterpieces suddenly become yawn-inducing and plodding. That story you wrote about a Martian lawyer? Fail. The reason for such a precipitous fall in terms of your epic storytelling is not that you suddenly realize you suck, but that you’ve been writing secretly in an old notebook for 12 years and no one except a few unfortunate individuals got to read it. That’s not an accurate gauge for your writing; that person holding your story will always smile and tell you it was the greatest story ever told. Partly because said reader is being nice, but mostly because of that needy and pathetic look on your face that says ‘please God, let him like it!’.   Readers can sense fear, you know.

I suppose another reason I blog is because I’m simply a narcissist; I blog because I can. It’s there, so why not use it? This leads to other dangers, like writing millions of self-absorbed posts about my pet rabbit or something. I’ve learned that people don’t really care about my pet rabbit, which leads to another thing I learned from blogging; the art of being universal. It’s a big world out there, I mean a BIG world. Writing about local events or using regional jargon just makes people’s eyes gloss over. I gradually expanded my thinking to a global scale – because writing about local affairs requires a whole back story for the audience, and I’m simply too lazy to oblige.

What was the question again? Oh right, why do I blog …

In a nutshell: I blog because it allows me to try out new material and to express myself. Writing in a notebook is great and all, but it’s in a notebook. Blogging is like being live on the air at a radio station: Immediate and thrilling.

Blogging has also helped me learn about my readers. They’re damn fickle, so it’s best to learn how not to bore them to death. This is vital, and you won’t learn it by scribbling in an old schoolbook; you gotta get out there and show those words to the universe. If you aren’t published, and you don’t blog, why the heck do you write in the first place? It’s there, use it! Get some eyeballs on that work!

This post was inspired by Katherine Grubb over at 10 Minute Writer who has posted responses from other writers about why they blog. It’s interesting, because most of those responses are the same one’s I would have given, if there weren’t a 200 word limit!


Feel free to leave a comment; tell me why you blog, and how has it benefited you and your writing.\

In Case You Missed it, here's an article I wrote called Going Nuclear: The 'Whoops' Factor, posted at The Bull
Posted by TheWritersDen at 9:22 PM