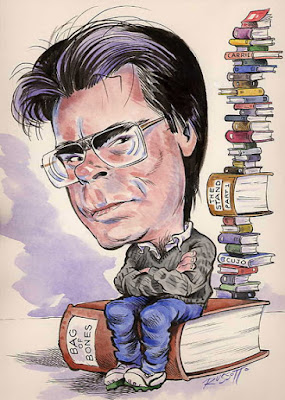 ❝Good books don't give up all their secrets at once." ❞ ∻ Stephen King


❝There are books full of great writing that don't have very good stories. Read sometimes for the story... don't be like the book-snobs who won't do that. Read sometimes for the words--the language. Don't be like the play-it-safers who won't do that. But when you find a book that has both a good story and good words, treasure that book. ❞ ∻ Stephen King


❝A little talent is a good thing to have if you want to be a writer. But the only real requirement is the ability to remember every scar. ❞ ∻ Stephen King


❝Writing isn't about making money, getting famous, getting dates, getting laid, or making friends. In the end, it's about enriching the lives of those who will read your work, and enriching your own life, as well. It's about getting up, getting well, and getting over. Getting happy, okay? Getting happy. ❞ ∻ Stephen King


❝A tragedy is a tragedy, and at the bottom, all tragedies are stupid. Give me a choice and I'll take A Midsummer Night's Dream over Hamlet every time. Any fool with steady hands and a working set of lungs can build up a house of cards and then blow it down, but it takes a genius to make people laugh.❞ ∻ Stephen King


❝Running a close second [as a writing lesson] was the realization that stopping a piece of work just because it's hard, either emotionally or imaginatively, is a bad idea. Sometimes you have to go on when you don't feel like it, and sometimes you're doing good work when it feels like all you're managing is to shovel shit from a sitting position.❞ ∻ Stephen King


❝In many cases when a reader puts a story aside because it 'got boring,' the boredom arose because the writer grew enchanted with his powers of description and lost sight of his priority, which is to keep the ball rolling.❞ ∻ Stephen King


❝If I have to spend time in purgatory before going to one place or the other, I guess I'll be all right as long as there's a lending library.❞ ∻ Stephen King


❝When asked, "How do you write?" I invariably answer, "One word at a time," and the answer is invariably dismissed. But that is all it is. It sounds too simple to be true, but consider the Great Wall of China, if you will: one stone at a time, man. That's all. One stone at a time.❞ ∻ Stephen King


❝If you expect to succeed as a writer, rudeness should be the second-to-least of your concerns. The least of all should be polite society and what it expects. If you intend to write as truthfully as you can, your days as a member of polite society are numbered, anyway.❞ ∻ Stephen King


❝Amateurs sit and wait for inspiration, the rest of us just get up and go to work.❞ ∻ Stephen King


❝If you write books, you go on one page at a time. We turn from all we know and all we fear. We study catalogues, watch football games, choose Sprint over AT&T. We count the birds in the sky and will not turn from the window when we hear the footsteps behind as something comes up the hall; we say yes, I agree that clouds often look like other things - fish and unicorns and men on horseback - but they are really only clouds. Even when the lightning flashes inside them we say they are only clouds and turn our attention to the next meal, the next pain, the next breath, the next page. This is how we go on.❞ ∻ Stephen King


❝So okay - there you are in your room with the shade down and the door shut and the plug pulled out of the base of the telephone. You've blown up your TV and committed yourself to a thousand words a day, come hell or high water. Now comes the big question: What are you going to write about? And the equally big answer: Anything you damn well want.❞ ∻ Stephen King


❝You can approach the act of writing with nervousness, excitement, hopefulness, or even despair--the sense that you can never completely put on the page what's in your mind and heart. You can come to the act with your fists clenched and your eyes narrowed, ready to kick ass and take down names. You can come to it because you want a girl to marry you or because you want to change the world. Come to it any way but lightly. Let me say it again: you must not come lightly to the blank page.❞ ∻ Stephen King


❝I like to get ten pages a day, which amounts to 2,000 words. That’s 180,000 words over a three-month span, a goodish length for a book — something in which the reader can get happily lost, if the tale is done well and stays fresh.❞ ∻ Stephen King


❝If you're just starting out as a writer, you could do worse than strip your television's electric plug-wire, wrap a spike around it, and then stick it back into the wall. See what blows, and how far. Just an idea.❞ ∻ Stephen King
Posted by TheWritersDen at 9:17 PM