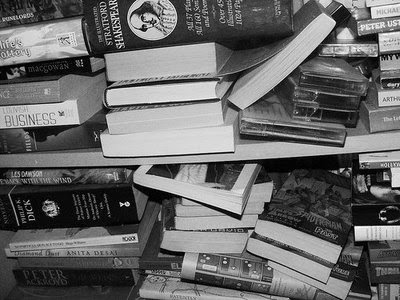 If one cannot enjoy reading a book over and over again, there is no use in reading it at all.
- Oscar Wilde
A friend of mine, Queenie, visibly shudders whenever I pass a paperback kiosk, an old book store, a library, or a thrift shop with any kind of 'Books For Sale' sign in the window, especially when I start searching my pockets for spare change; she knows I'll end up buying something. More than that, I get this glazed look in my eyes and conversation drops to nil because I'm too distracted (absorbed!) by all the books. Who can resist the idea of possibly finding a classic novel for a couple of bucks? Apparently not me.
Halfway through the biography section, Queenie starts complaining that the place smells like rotting cardboard and mold. I don't disagree, but nor do I care: I find a copy of Walt Whitman's 'Leaves of Grass' for two dollars and contemplate buying it, even though I already have a copy sitting at home. In fact, I have multiple copies of books; most are innocent mistakes - I'd forgotten that I had them already.

I have books on my shelf that I'll probably never read, books that seemed like a good idea at the time; a quick glance at my shelf reveals copies of Dianetics, by L. Ron Hubbard, The Garden of Rama by Arthur C. Clarke, and a whole bunch of Shakespeare (Who reads Shakespeare, really? Be honest!) that I flip through occasionally, late at night, after a sip (or three) of wine.

It's the prices, I think. Hard to resist: 50 cents for The Great Gatsby? $1.99 for Atlas Shrugged? 2 bucks for the Ziggy Treasury!?

The hardest part is getting rid of books; I still have my copy of The Catcher in the Rye from the 7th grade. Why? who knows. I like to dip into my old tomes from time to time, I guess. Queenie thinks I'm nuts, "Why do you keep a book after you've read it??" she says. Meh, I'm a writer. We do crazy shit like that. I don't keep everything; I hurled Dan Brown's 'Deception Point' off my balcony after reading 10 pages.

There are books I've read dozens of times, like The Monkey Wrench Gang, Huck Finn, Catcher in the Rye, and Goodfellas, but I can't make my self throw them out or give them away. Is this book hoarding? Will I end up on one of those reality shows where camera crews wander through my house filming my shame for all the world to see?

Here's my theory; standing in a book store surrounded by musty old books, any one of which can be purchased for a pittance, is too much to resist. But will I actually ever read this copy of Atlas Shrugged I have clutched in my sweaty hands? Who cares! It's only a buck! It's the thrill of it! Like an addiction. Addicted to buying books! I feel giddy, passing the dollar over to the old guy behind the counter. Ha ha! Fleeced him, didn't I? I bring the book home, flip through it for a few moments, then shove it on the shelf beside my Scrabble Dictionary.


I Come Bearing Random Gifts!
What do you do when a friend randomly gives you his old books as a gift? This happens to me all the time.  My friend Lambchop is a book hoarder, and once in a while he cleans out his sty and presents me with a random set of books he decides he doesn't want anymore.  Most of them are horrid: a lot of cheesified fantasy books with muscular sword-wielding warriors on the cover with names like K'larr-Kuun.  Don't get me wrong, I always love to get free books, but really, come on!  I know it's the thought that counts, but when the thought is 'I'll clean out my shitty book collection by giving it to David' it kind of negates that sentiment (Said books don't last long on my shelf, I usually re-gift them to friends)

By the way, any of you want some books? Free to a good home!

The Wheels on the Bus Go 'Round and 'Round
Every morning for the past six months there's been a girl on the bus who reads Ayn Rand's 'Atlas Shrugged'.   I don't know if she's actually reading it, judging by the slow migration of her bookmark, or attempting to look intelligent.  I often do this; when reading something above average level, say, Othello, or any Carl Sagan book, and especially when there's a cute girl in the vicinity, I prop my book up, making sure she see's the name on the cover.  Usually she stares blankly, eyes glassy and vacant.  One time, I had my Jack Kerouac book on the bus - and a group of girls were staring at the cover.  Ah, they noticed how cultured and intelligent I am! But when I looked closer, I saw that they were only trying to figure out how to pronounce KEROUAC.

Random Samplings for Your Consideration
If You're a writer you'll probably want to take the Writer's Oath. Don't want to get busted for malpractice now, do you? Writing without taking the oath could land you in the Literary Doghouse for eternity! Please raise your right hand ... repeat after me ...


The Writer's Oath
I promise solemnly:

2. to respect my writing self, and

3. to nurture the writing of others.

I accept these responsibilities and shall honor them always.
Gail Garson Levine, Writing Magic: Creating Stories that Fly
No Guts, No Grammar!
My spelling is Wobbly. It's good spelling but it Wobbles, and the letters get in the wrong places.  ~ A.A. Milne
His sentences didn't seem to have any verbs, which was par for a politician. All nouns, no action.  ~ Jennifer Crusie


The rule is: don’t use commas like a stupid person. I mean it.  ~ Lynne Tress
If you can spell "Nietzsche" without Google, you deserve a cookie.  ~ Lauren Leto

What the semicolon's anxious supporters fret about is the tendency of contemporary writers to use a dash instead of a semicolon and thus precipitate the end of the world. Are they being alarmist?  ~ Lynne Truss

It never ceases to amaze me how prosaic, pedestrian, unimaginative people can persistently pontificate about classical grammatical structure as though it's fucking rocket science. These must be the same people who hate Picasso, because he couldn't keep the paint inside the lines and the colors never matched the numbers.   ~ Abbe Diaz

Take what the British call the "greengrocer's apostrophe," named for aberrant signs advertising cauliflower's or carrot's in local fruit and vegetable shops.  — Naomi S. Baron (Always On: Language in an Online and Mobile World)

Next Week: An In-Depth look at the secret world of Don Knotts! Don't Miss it! (Erm, just kidding)

Thanks for dropping by,  and thanks for playing.  Your Pal, David Hunter.
Posted by TheWritersDen at 8:11 PM