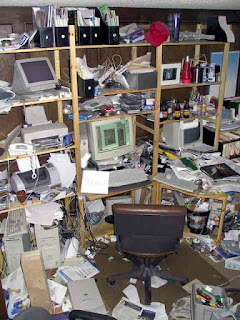 
When I moved into this charming little apartment in the heart of Toronto, I had visions of a great literary outburst; after all, the streets here are filled with artists, writers, college kids, artsy types – a real SoHo/Village kinda place. I can see downtown Toronto from the eight floor of my balcony, which is large and spacious and is shady in the afternoons, and where I expect to spend the long summer days writing. It’s nice, I must tell you, very writerly.

How important is a writing space?

For most of the winter months I had a small desk tucked away in one corner of the apartment; it was cozy, and I was very productive there, but you know how artists are - never satisfied. I thought I would move over near the large window where the sun would shine through in the mornings. It LOOKED nice, at least. It turned out to be a mistake. Writing became a rather laborious affair, and I wish I could tell you why. It was probably the television always distracting me, or the dearth of sensory input – too much to look at! Whenever my mind would go blank and that empty page stared back at me I’d naturally avert my eyes; I’d see the TV, maybe turn it on. I’d see the kitchen; start getting the tummy-grumbles. Not good! Once the ass is off the seat, problems arise.

A writing space may be more about the meta-physical then the actual physical though; if you find a good productive spot, lord, don’t change it unless you have to! This particular spot did me no good; I went more than a month without any significant writing progress – it was time to move. Anything to get me writing again! Even if it meant eliminating that toxic writing environment; Dante’s, or David’s, eighth circle of bad writing spaces had to go.

It is interesting how and where famous authors managed to write. Stephen King wrote in the basement of his rented place, beside a boiler. Lord knows how he managed that. John Cheever used to put on his only suit to go to his studio to write, and then he’d promptly take it off and write in his underwear. Ernest Hemingway, while living in Key West, would awake at dawn and walk to his pool house where he kept to a strict writing regimen; 500 words a day, sitting at an old wooden desk, and in the afternoon he’d set off to Sloppy Joe’s Bar to meet his friends. Stan Lee, famed Marvel Comics founder and creator of Spider-Man, would place his typewriter on top of a high table near his pool and type standing up. Whatever works, right? Chuck Jones, while not technically a “writer”, had a workspace kinda like mine; jammed into a corner, packed with books and shelves and pens. Pens, although no longer used in the “composition” phase for me, are still a vital optic; they look rather cool sitting in bunches on top of my desk. Old habits.


I finally tired of sitting near the window; the spot was just not working for me. I promptly took my little desk and brought it into my bedroom beside my bookshelf. It felt right, mostly because I’m slightly isolated from the rest of the apartment. Is isolation the key? I guess it works for me. I suppose it worked for Edward Abbey too, that desert anarchist and brilliant writer that I love so much.

As I’m fond of re-telling, Edward Abbey was a Fire-Look out at Numa Ridge for years, isolated for months at a time (occasionally he’d sneak his wife up there with him..) and in the absence of a telephone, or internet (hadn’t been invented yet, and I’m sure Edward had no inkling of this technology way back in 1975) and yet, sitting isolated with his Underwood typewriter, he’d pound out his work. I guess he had no choice; we writers often have no choice. I’m sure he had a writing space somewhere, one that he called his own in a place he occasionally called Wolfe Hole Arizona, but from what I gathered he wrote in Bars a lot (Especially Nelson’s Marine Bar in Hoboken, although that may have been in jest) and since he was a writer of the mostly “Nature” and “Outdoors” variety, I gather he wrote in the great outdoors a lot, in tents late at night, or under the stars sitting by a river, that sort of thing.

I’ve tried the “wandering writer” bit; coffee shops, libraries, parks; it all sounds very bohemian and very artsy, but here’s the trouble; I’m a natural observer. If there’s motion and activity anywhere, I get distracted. I’m not one of those people who can easily zone out in public; I guess it’s the old gun-fighter in me; I always sit with my back to the wall so I can see everything. It is part of the writer mythos to want to carry around a note book and a pen and be able to write anywhere at any time, but the reality is, most of the time, I can’t do it! I have to be crammed into my cozy little nook, with my books and references and pens close at hand. Truth be told, I’d be lost without my laptop and all my papers. I’ve become a slave to my writing space. It’s my “office” and my “secret place”, and here, I’m in control, even if sometimes it seems I’m out of control. Take me away from it, and I’m dead in the water.

Given the circumstances though, I could probably manage to write whilst being isolated for months atop a fire-lookout. But if my penchant for Internet and Microsoft Word is any indication, it would be tough. I needs my technology! I’m plugged in; can’t help it. I’d need to unplug and de-compress for a long while if I were to ever be a wandering writer and sit at a park bench beside a homeless guy and scribble sweet somethings.


So here I am, sitting in my new writing space, happy as a clam. And as I said, I haven’t yet figured out why this space works better than the other, but it may be more meta-physical then physical; the spot just feels right, the writing spirits, and yes, the writing aura, are optimal here. Sure I’m crammed in; I’m surrounded by book shelves, and I have my art desk just beside me, almost bumping my elbows. The radio is tuned to a jazz station. It’s nice. The dreaded brain-eating TV is off, and will stay off as long as I’m in here writing. Which could be a while, ‘cause I like it in here.

Out Of Office: More Writing Space Debate by Mina Zaher at Journey of a Screenwriter

Write Now...a Mother's Musings: Space of my Own

Addendum:
I’d be interested to know what your writing space looks like, and did you ever have a bad writing space? If so, why? ; leave a comment and let me know. 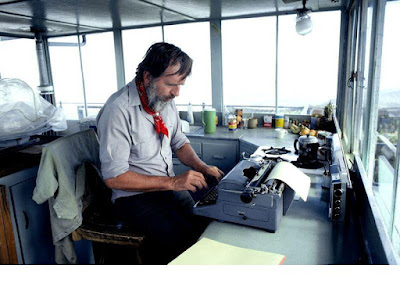 Edward Abbey pecking away at his typewriter atop the Numa Ridge Fire-Lookout, circa 1975
Posted by TheWritersDen at 1:44 PM