The Biblio Files: Part One 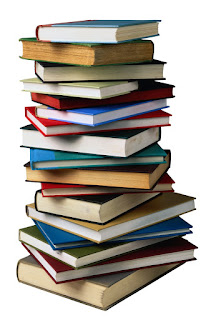 Ex Libris: A Bookish Love Affair
All this week at the Den we’ll be exploring our love affair with reading through various contributors. I’ve asked a diverse group of people what their thoughts are on books, why they mean so much, and how they’ve inspired us.
A Boy and his Book
by David Hunter

A book is the only place in which you can examine a fragile thought without breaking it ~ Edward P. Morgan
When I was 12 my mother took us to a Shelter for Abused Women. My father, a violent alcoholic, had finally forced her to leave after coming home drunk and destroying the house in a blind rage. And by forced, I mean literally fleeing out the door at 3 am on a cold October night, two children in hand, nowhere to go.

The shelter was a warm and safe haven. We arrived in the rain soaking wet at the front door and they took us in and fed us. While my mother talked to the counselors, they gave me and my little sister a room and we fell asleep. I was 12, and scared; we had left everything behind; toys, friends, books; our whole life.

I wasn’t a big reader of novels as a kid; I read the usual stuff -- Spider-man and Archie comics -- I read a lot of Beverly Cleary and Judy Blume too, Including a very racy copy of Wifey that my mom had left lying around (The image of Frank the Plumber doing the nasty with Wifey still haunts my memories) but there in the confines of the Shelter was a large reading room, complete with about 4 million books. It was warm there, even though you could see the cold autumn day through the large bay widow. I spent hours wandering through those books – there were so many. I finally picked up this one book that had an illustrated cover of an explosion – It was called The Monkey Wrench Gang, by some guy named Edward Abbey.

This book was a revelation for me!

It had curse words!

I must admit, I didn’t understand the sub-text; it was far too dense and mature for my age level. Plus, one of the counselors kept taking it away from me. But I kept going back for it. Sometimes I’d sit and stare at that cover, and at that name, Edward Abbey. I’d wonder who he was. I had this impression that he was from England or something; I guess when you’re twelve, logic takes long hikes and forgets to come home. When I finally had access to this thing called Internet, long about 2001, I searched for him, and finally found out who he was. I was more than a little sad to find he had passed away in 1989. It was kind of like a friend had died, without me knowing.

That book had me mesmerized though; I loved the pages, the words, the paragraphs, the peculiar algorithm of the spaces, and I instantly wanted to write a book too. When I spotted the electric Olivetti typewriter in one of the offices I asked if I could use it to write stories. They were very encouraging; they let me sit in there for hours, typing away to my heart’s desire. It was my escape. Something was illuminated when I played with words. And all that other stuff just melted away.

When we left the shelter weeks later, after my Mother had found a place, I liberated that book. I snuck it out with me, inside my jacket.

It wasn’t until High School a few years later that I found it again amongst all my things, and I read it for the first time, REALLY read it; I was slightly more literate and able to understand it. This time there was no mistaking the sub-text; Phrases jumped out at me, ideas, inspirations. This book made me want to write. And every time I read it, I get the same tingling sensation; the need to grab a pen and start scribbling.

Edward Abbey may not have written a great classic, but for me, it saved my immortal soul. Probably too dramatic, and I wish I were talking about something with a little more Americana to it, like The Adventures of Huckleberry Finn or The Grapes of Wrath, but this is my story Jack, and I’m sticking to it.

I’m proud to say I still have this book. Its a little care worn; the cover isn’t doing too well, and page 231 is now a loose leaf. I had to buy a back up copy because it’s now too fragile to carry around with me to the beaches and coffee shops I frequently haunt (okay, I have TWO back-up copies!) It’s sitting beside me right now as I write this, like an old friend seeing me through the recollections, keeping me company. Our 30 year friendship continues.

The crux of this post is, why do we love books?

Stephen King says he reads to study the craft, but he also reads because he enjoys reading.

Me? I can only answer as a writer; my desire to create my own worlds and characters is overwhelming, and I take pleasure in the works of others, a kind of voyeuristic pleasure. I like to see what other writers are up to, and when I find those rare sorts of books that resonate with me, they make me want to create. But if I were to answer as a plain old reader, the answer would be simple; sometimes I just want to be whisked away, to go gallivanting through the pages of history with the many characters that I’ve come to love and admire. I read because writing is hard enough without that back-knowledge of literature; Huck Finn, Jay Gatsby, Holden Caulfield, The Joads – all have been goods friends to me, gotten me through some tough times.

They all stand at my back as I write for the future. 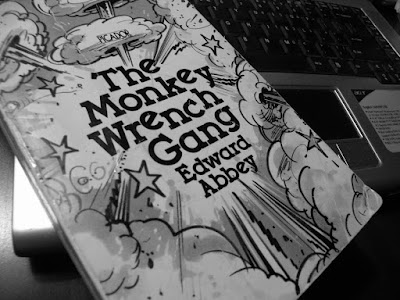 I am enormously grateful to have a wonderful line-up of guests at the Den this week. Today I’m happy to present Joseph Lane’s ruminations on his love of books, and what they mean to him. Hope you enjoy! I know I did. 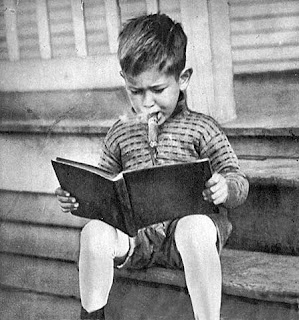 Isaac Asimov and Beyond
by Joseph Lane

'Happiness is doing it rotten your own way.' ~ Isaac Asimov

I wasn't always a bibliophile. When I was in high school I rarely read the literature the English teacher assigned. It seemed like work. I hated the idea that I was expected to consume something that I didn't yet yearn for. That, and well, I was lazy. I had a knack for writing essays high on bullshit and light on content. I still have that skill, hell it's become my life's work... but where was I? Oh yes, books. I didn't become an avid reader until the summer after I graduated from high school. I was a late bloomer. My English teachers weren't to blame. They exposed me to 1984, Animal Farm, Lord of the Flies, The Old Man and The Sea, lots of Shakespeare. I was not spared the opportunity, I just hadn't found the intellectual drive to read yet.

The summer after my graduation I got a job working with a nonprofit arts organization. They operated in the basement of a small defunct church. The job had me doing a lot of office administration stuff. There was photocopying, stamp licking, letter mailing; I once had to book plane tickets and accommodations for Farley Mowat. Fun. I spent most of my time, however, reading sci-fi and organizing used books which we sold out of the basement. My love for books grew, I believe, because I was surrounded by them. I can still smell those musty old books. There were boxes and boxes of them. I bet I touched and thumbed through each and every one of them, even the Reader's Digest Condensed Books, The Harlequin Romances, and the Louis L'Amours, all of which seemed to be in infinite supply.

I was hooked on sci-fi at first. I read every little bit I could find. I found sci-fi easy to read, I could go through a book every day or so. Along the way I bumped into Vonnegut, who at my tender age of 18, seemed to me to be egomaniacal and prickish. Hey, I was young, we all go through stages. Isaac Asimov was my favorite. My father was also a fan. I recognized his name from books that were found in the bathrooms and on bookshelves of my youth.

I quickly outgrew sci-fi: by midsummer I had moved on to physics, spirituality, and comparative religion. Big jump? Nah, they are not all that different in theme or content than sci-fi. They were all chasing the same ghost. I found Buddhism, I found Ginsberg. I read Howl, the gateway to the Beats. Ginsberg lead to Kerouac, Kerouac to Burroughs, Burroughs to Kesey, Kesey to Hesse, Hesse to Dostoevsky, Dostoevsky to Camus, etc, etc. Hunter S. Thompson arrived as if through osmosis. Vonnegut was rediscovered.

The purist in me would love to proclaim that I became the reader and the writer I am now because of an early run with Holden Caulfield, or perhaps the tragic story of Piggy and his broken glasses, but that would be a lie. My love of books started with Isaac Asimov. It quickly grew from there, but it was his stories, and those of his 50¢ a paperback colleagues, that gave me the itch. I have been scratching myself raw ever since. Thank you Mr. Asimov.
Posted by TheWritersDen at 9:05 PM