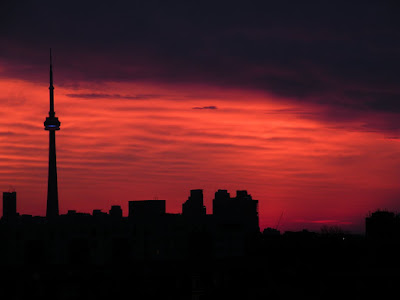 This morning something dramatic happened.

I’d been in the throes of a writer’s block of some kind, although I generally refuse to acknowledge the term “writer’s block”, I can find no other way to describe it except that I’ve been unproductive.

Then the dawn arose.

I took a photo of an imminent sunrise.

This got me thinking about the possibilities of photo-prompts.

I’d never tried it before, or even thought about it. I’m sure someone , somewhere, has thought of this. I suppose it’s natural; a photo is visual, physical, aesthetically stimulating, and any other adjective you can think of. Sometimes we even READ for inspiration. So why not photos?

However, if you follow the Marshall McLuhan school of thought, a photo could be called “Hot Media”…


The hot media are those which have a large influence on humans and their sense perception. According to McLuhan, these media even possess a "destructive strength". The pioneer of the media ranks writing, the phonetic alphabet, the book, the photograph and also the radio among this kind of medium. These objects of communication place much data and detailed information at the users disposal, which mainly concentrate on one sense of the recipient.

It is affected by this, but remains rather passive in the behavior. The cold media have a small influential strength on humans. The reason for this is that they offer little details and information, and are not optically delightful for humans.

After watching television my brain turns to mush: too much thinking is done for me, and when it gets time to start creating in that highly cognitive endeavor called writing I find the functions are a tad off-center. This is an extreme example of course; and an obvious one; we all know that Television turns our brains to mush. But what about the photograph? Can a photograph have the same effect?

When we write we are essentially putting into words the pictures in our heads anyway, aren’t we? But have you noticed that after a brisk walk when ideas start floating around in the old transom and creativity starts to peak that you race back home to put these things down and…

That blank page just stares back, doesn’t it?

Stephen King bought a radio station years ago because he loves music, and because he loves radio. He grew up on it, listening to music, and Radio Theater. He attempted to write a play to be performed on air a few years ago, but he found that what he’d written just sounded like people talking. He said that the art of Radio theater relied on creating certain visual cues in people’s heads as a means of communicating, an art form which has since been lost to the advent of Television. We have all become very visual, which does not bode well for writers in particular. We can still get by, for the most part, but have you ever noticed how great the pre-television authors were? The pictures they painted, the images they put in our heads?

Take a camera, go out and take photos. See where it leads you. I just started a photo site called Photo Genesis that I hope will prompt me to write new things, in new ways.

After all, I’ll try anything, if it’s creative!

David Hunter, over and out.

The Photo in Question: Photo Genesis

I’d like to thank Denise Robins AKA @dkrobbins on Twitter for starting the discussion about writing prompts ~ Visit her site, Denise Robbins Blog http://deniserobbins.blogspot.com/

Note: Anyone noticing errors in this post, feel free to let me know! Catch me on Twitter too, and don't hesitate to tell me your thoughts.
Posted by TheWritersDen at 11:06 AM