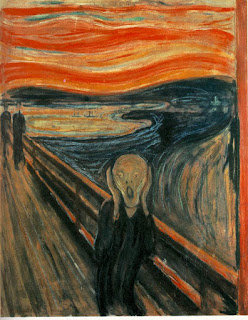 
"...Writer’s Block conjures up an image of a kind of Berlin Wall which can never be scaled ..."


In the constant battle against this stupid thing called writer’s block (Which I don’t endorse) I have yet to codify exactly what stops the mind in the midst of a great flow of creativity.  I refuse to acknowledge it as a “block” of any kind. I think it may be more of a brain freeze, the way computers freeze.

I wrote a great post (by MY standards anyway) a few months ago called ‘Shut up and Write: A Master’s Thesis’, half advice, half tongue-in-cheek comedy sketch.  I say tongue-in-cheek because half the time I’m very reticent to dispense advice, or tell people how to write. Sometimes I feel like I’m full of it and disguise my advice as internal dialogues about what’s popping in my head, a kind of disclaimer. As an unpublished author, giving people advice on how to write seems rather presumptuous. Anyway, this post I wrote was great, I really knocked it out of the park, the message was universal. It was something all writers could relate to, and it was funny.

You write something great, and that garners you a few more followers, then … you gotta try and repeat that success, somehow. It’s a form of page fright, to coin a phrase.

Is the subject matter ‘Big’ enough? Does it matter?

Is it even remotely interesting?

Does it make sense as a whole? Does it even have a theme?

Would I rather be eating Oreo Cookie Ice Cream or torturing my brains and eyes by staring at this stuff I wrote for a second longer?

I guess it’s a kind of self-correcting that’s going on in the brain.  I actually care enough about my readers to spare them the mundane and inane babblings. Like Hemingway said: Writer’s should have a built-in shit detector.

And this Writer’s Block thing, I have tried to eradicate it from my vernacular because it’s very negative.  Writer’s Block conjures up an image of a kind of Berlin Wall which can never be scaled.  My term, Brain-freeze, is a little more hopeful: the freeze can be thawed.

In the end, it’s the reader who decides if the work is good, or readable, or crappy.  If it were up to the writer, everything would be considered a steaming dung heap (A Midden for all you word enthusiasts) and would end up filed under G in the trash can.  We as artists tend to take this stance to a crazy degree.  Who is ever really completely satisfied with his/her work? I know I’m not.  Perhaps this accountability makes us better writers, perhaps it stops us from writing all together, but whatever the case, at some point we have to remember that time is of the essence, and we must thaw that brain freeze out as quick as possible, so we can get back to doing what we do best, being creative.

So I’ll ignore the fact that a lot of people will read these words, and stop being so worried about whether it’s good or bad or important or insipid, or whether the theme is grand or small just plain microscopic.  I just love writing, and all I can hope for is that you’ll all love my writing too.

It’s the best I can hope for, under the circumstances.

Writer's Block: The Basterd Returns!
Posted by TheWritersDen at 9:59 PM