Shut Up and Write: A Master’s Thesis 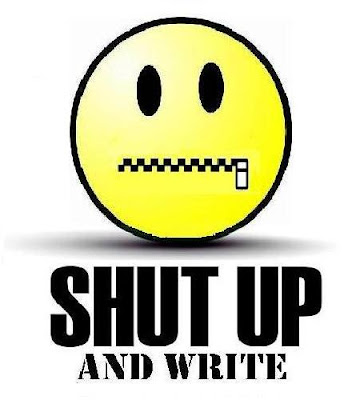 "... Kill the procrastinator inside you. Kill the lazy bastard writer and nurture the benevolent workaholic writer. He’s in there somewhere. Check the closet; he’s probably cowering in the back behind the shoes ..."


A few weeks ago I was telling a friend of mine about how I’d love to get published, and all the wonderful things I’d do with the advance money and the travelling and book tours and all that good stuff that comes with being a successful author.

She sighed heavily and said, “Just shut up and write already!”

Naturally I was kind of offended by this statement at first. I write, don’t I? It may not look like it sometimes, because I tend to stare off into space (which is the way writers work, coincidentally) but to the outsider this only sounds like excuses – and if heard often enough they begin to sound like what they really are; a deflection , a ruse, a way to make the question go away. I write, sure. Am I producing anything? Maybe not. I blog a lot, gotta build a fan base, get to know people. But in the end we write to produce stories, not blog posts. At least for me that’s the goal.

I’ve had a blog for about a year now, and it seems pretty successful. A good number of people follow it. What has been missing for me is the fiction that I love so much. Blog posts have become the crutch for me; whenever a story gets tough or doesn’t feel right, I turn to blogging because it’s easy. I can open a Word Doc and just vamp. They’re great because, as I am writing this, I am slightly hung over and in a writing mood, and a blog post is something that wakes my brain up enough to deal with the agonizing prose.

So when is a good time to Shut Up and Write?

For me it’s when I know I should be writing and I decide it’s easier to go on Twitter or do a blog post (which is still writing, but I digress) or when I have a Word Doc open, write a few lines, then start perusing my Facebook profile or checking my email, which eventually leads back to Twitter and that’s where the troubles all begin, kind of like avoiding a lover during an argument. It’s remarkable how we can love something as much as writing and yet avoid it like a plague sometimes!

This all came to a crashing reality when one of my followers wrote to me, “shouldn’t you be writing or something?” when I was happily updating away on Twitter.

I needed a battle cry to stop this behavior, so Shut Up and Write was born.

Whenever someone tells me to stop talking about writing and just write, my first reaction is to become indignant:

Hmmph. Who does this person think they are, the Queen??

Right! You think writing is easy, don’t you? Try it sometime!


These are statements we’ve often made to people who are only trying to tell us that we are being very lazy and not producing anything and sometimes we just don’t want to hear the truth, because the truth sucks sometimes.

In truth, writing IS hard, and sometimes I can’t face the page (not writer’s block, I don’t acknowledge its existence, thank you very much) and finding other things to do is simply easier. It’s crude, and kind of childish, but you have to see the complexities behind it.

Shut Up and Write means going silent online so you can concentrate on what you love most, writing. I know it’s not fun to leave a party early to go home and write, but if we’re ever to be successful at this business it must be done. Shut Up and Write also means stop talking about writing and start actually writing. Kill the procrastinator inside you. Kill the lazy bastard writer and nurture the benevolent workaholic writer. He’s in there somewhere. Check the closet; he’s probably cowering in the back behind the shoes.

That being said, Twitter and Facebook are great companions for writers; they offer all kinds of advantages and connections and opinions and ideas, but as Kenny Rogers says, “You got to know when to fold ‘em …” and know when enough is enough. The words, the pages, your book is what’s important.

So, the sermon is over. Some of you may think I’m being whiny. Please excuse me; it's the hang-over talking.

Today, I nurse this headache and sip my tea (Advil, I love you!) due to the 7 cups of Wine and Vodka Sangria I had last night, I am functioning on that groggy half-minded plane we call Hang Over City. It’s mean stuff! But I’ve decided to write through it. Got some big plans today, and they all involve writing.

So, time to Shut Up and Write.

A great post by @DreamsGrafter at Journey of a Screenwriter ~ What Does It Take to become a Successful Screenwriter? http://bit.ly/c3aoZN

Going Retro! Here's a great post explaining the profound nature of Shut Up And Write:

The Art of Mind: Shut Up and Write


A Letter to Brian