The Definition of a Writer, and Writing
or "We Gonna Get all Metaphysical on Y'all" 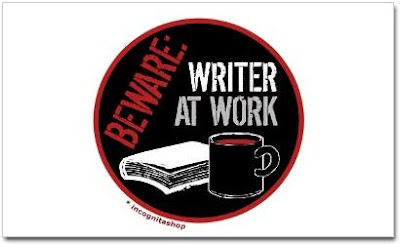 "...It's possible to have a writing career, but you must first ask yourself if, in fact, you are a writer ..."


Yes, I know, It’s been too long between posts, but life has a way of wedging itself between me and my writing, like a fat guy (Horizontally Challenged) blocking my view at the movie theater because he had to go get some Goobers and is trying to get back to his seat.

First of all, I flamed out on that NaNo thing (National Novel Writing Month) and I felt like such a failure (There’s no shame in it, it happens) but I was nearing exhaustion from work, and time had become my enemy (is Time not always the enemy?)

And then there was Christmas. Ugh. Family, friends, constant drop-ins, get-togethers; it was like one giant unending cocktail party. I marvel at ANYone who can write during the chaos of the holidays.

The festive season tends to shake writers out of their natural state (brooding anti-socialism) and into a kind of gregarious drunken happy-state, which is not conducive to a writer’s constitution - at least not mine.  Also, trying to find an hour of peace to get something down onto paper can be a struggle; during the holidays people tend to stick around till the wee hours of the night, drunkenly talking your ear off.

Finally, After all the folks have gone home or have crashed for the night, around 3 AM, say,  I'd get all excited to write. I'd quietly sit behind the computer and open a Word Doc, the booze still coursing through my brain, and we sit there, the Doc and I, with only that cursor flashing between us, and …

Nothing. Sleep just overwhelms me. This is the usual occurrence.

Slowly I come out of this happy-ass state, usually takes a few days, because every time I look at my blog it gets stinkier and stinkier and I start hoping that the last post from a month ago changes magically on its own (alas, it won’t) …

Happy New Year! Start Writing, sucker!
A new year is upon us, and as usual writers make confirmations anew; resolutions are made, promises sworn, ideas hatched, and we can forget all about our perceived failures (Read: Self-Loathing) because the slate is clean, and we can plan that book (or plan to finish it) because there’s a whole shiny new year ahead, and anything is possible.

It always helps to define what a writer is, and what writing is, to aid us in our lonely struggle, to get some sorta perspective on things, because all that info on writing we've been absorbing must have clogged up our fragile brains over the long year. I mean, haven’t you heard millions of words pertaining to writing in the past 12 months? Time to etch-a-sketch it. I perused the web and came up with some definitions of writing and writers; call it a "Drastic Renewal of Purpose", if you will.

Keep it Simple Stupid
Definition of a writer? Isn’t it “One who writes?” … yeah, it is, but as usual I need to go deeper, because I like to confuse the issue. I like to throw some Metaphysical Mojo into the conversation just for good measure. Sure, a writer can be defined as 'One who Writes' but, does that include shopping lists?

One who writes, or has written; a scribe; a clerk.
One who is engaged in literary composition as a profession; an author; as, a writer of novels.
Okay, not bad, better than 'One who Writes', ya know?
Writing is the representation of language in a textual medium through the use of a set of signs or symbols (known as a writing system).
Well Duh!


Stephen King believes that writing is telepathy. “All the arts depend upon telepathy to some degree, but I believe that writing offers the purest distillation” (p. 95, On Writing).


He acknowledges that writing is a learned skill, but continues by asking, “…do we not agree that sometimes the most basic skills can create things far beyond our expectations? We are talking about tools and carpentry, about words and style…but as we move along, you’d do well to remember that we are also talking about magic” (p. 131).

Some writers evoke the imagery of writing being akin to alchemy. Speaking of Jim Carroll’s writing, Cassie Carter titled her master’s thesis “Shit into Gold: Jim Carroll’s The Basketball Diaries and Forced Entries.” Carter discusses how writers, specifically Jim Carroll, can reinvent themselves through writing. The Medieval allusions throughout Carroll’s writing support this image of the writer as an alchemist.

To Nathaniel Hawthorne, writing is Gold:

“At some future day, it may be, I shall remember a few scattered fragments and broken paragraphs, and write them down, and find the letters turn to gold upon the page.”
So what is Writing? What is a Writer? I couldn't tell you, but it might be Alchemy, it might be Gold, it might be Magic, and yes, it could be simply what it is: A writer writes, and writing is writing.  But If I accepted that answer than what the hell am I writing this post for?  (Because I'm a writer, and I have now come full-circle somehow ...)
Thanks for sticking around.  Let's have a productive year and fill the world with words, okay?
Your Friend, David Hunter (Happy New Year!)
Psst: Sorry about some of the links, have to fix em: It's late here, and I'm a bit groggy =)
Related Madness:
Suite101: What is Writing?: Writing Can be a Magical Process http://www.suite101.com/content/what-is-writing-a117152#ixzz19NFWlpi1