Writers and their Fabian Tactics! A Sunday Journal 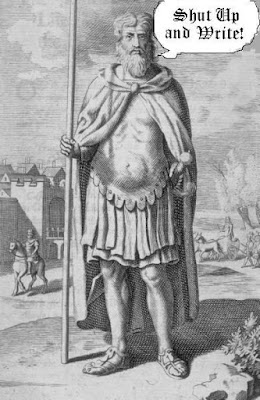 Sure, Nero fiddled while Rome burned. And the great Cunctator (delayer) Roman General Quintus Fabius Maximus was noted for his wariness, and for his use of hit and run tactics, to delay, and to keep his opponent off-guard. Unfortunately a lot of writers do this too; we do a hit and run on our pages, hoping that maybe the thing will write itself.

But when I come back to that page it’s just as I left it; a little stinkier, a little more stale.

I wonder if the internet age has shortened my patience? Seems next to impossible to just sit for a sustained amount of time lately and put words down. I always blame the weather; its summer after all, time to go out and enjoy life.

I’ll write later, when the sun’s down, when it’s cooler.

In Stephen King’s great book ‘On Writing’, he talks about sitting down every day and clacking out 2000 words, come hell or high water, and he doesn’t allow himself to shut down unless he gets his 10 pages. I guess that’s why he’s the King. And we can’t use his opulent lifestyle as an excuse: he wrote Carrie in the basement of a run-down building sitting next to a boiler.

The reason I bring it up is that I went to a library yesterday to get some work done. I almost never do that. I prefer the comfort of my own hidey-hole (or Hobbit hole, if one existed) but the idea stuck in my craw (an eponym, but we’ll get to that later) and so I packed up my trusty laptop and headed out to the Toronto Reference Library, one of the biggest libraries in Canada.

Mistake: The Toronto Reference Library has five levels, 416,035 sq. ft of space, 360,000 linear meters of manuscript materials, and 1,653,665 catalogued items, including an Arthur Conan Doyle Collection, devoted to the life and works of the creator of Sherlock Holmes, housed in a room built to look like 221B Baker Street.

Plus there was a book sale going on: a buck a book.

I made a feeble attempt to ignore most of these things – except the book sale, where I kept my purchases down to two books: How to Write Crime Fiction, and a book of Eponyms (An eponym is a word derived from the name of a real, fictional, mythical or spurious character or person)

Sadly, I had to ignore the volumes of history books and autobiographies that were selling for a dollar. I could only look forlornly!

I won’t mention the DVD’s that were on sale for 2 bucks each.

Now, you may think that in a library of that girth, almost 500,000 square feet of literary wonderment, that there’d be a place to sit, but I did a lot of walking. Each floor is a kind of mezzanine, and you can look straight down at all the other floors. If all the tables were taken, I’d try the other side, which is a 5 minute walk. And If I happened to see an empty table down on the 3rd floor, I’d rush over to the elevator; get down there, only to find the position had no plug. I wanted one of the seats along the mezzanine wall because of the natural light flooding in from the sky lights. Fluorescents make me ill.

Yeah, I was looking for a plug. I have to admit, I can’t write without my laptop anymore. I tried to write manually for a while but, here’s the truth, the computer pulls my attention away from my surroundings. I tried writing by hand for a while, sitting across from a guy who kept drumming his hands on the desk and shuffling his books around, until I gave him a look of distain.

You’d think that they’d put more plugs in the place!

Another truth: I just can’t turn my surroundings off.

If you know me, you know I can’t write in public places. I know, this is all sounding like Fabian Tactics, but it’s true (the truth is abundant today!) and I went down there knowing this but was hoping that something would change in this regard. The girl across from me (Hello, I love you. won’t you tell me your name?) never took her gaze off her work. I’m not that way; in public places I’m like a gun fighter. I like to sit in the back and observe everything. I’m a writer! That’s what I do. I observe. Now you’re asking me to stop observing? Take an eyeball first!

In between sneaking peeks at the very pretty lady who was studying intently, and ignoring the homeless guy who was shadow boxing in one of the book aisles, I managed to spot a seat with a plug (sorry dear lady, I must leave you, I said to the girl across from me, silently)

Not the greatest 1000 words I ever wrote, but it’s something.

I do love the thought of writing in a Library, but it’s not conducive to my personal productivity, not yet at least.

I know a lot of you are public writers; tell me how you do it! I am honest to God curious. Leave a comment and talk to me! Conversely, do you employ Fabian Tactics when you sit down to write? Let me know, my door is always open to comments.

The Shut Up and Write Badge of Honor Awards
This week’s honors go to:

Carrie Bailey, AKA @PeevishPenman on Twitter, for reading 50 blog posts this week, and for being inspired by the Shut Up and Write movement and keeping the dream alive.

Sleehadley, AKA @sleehadley on Twitter, who has no name apparently, but is a worthy inductee for the Award, mostly because she tells me to Shut Up and Write constantly.

old_hack, AKA @old_hack on Twitter, is another nameless wonder who, since adopting the Shut Up and Write ethos has disappeared for vast stretches of time, and I can only assume he’s been writing all this time (If upon official investigation by the Hunter ‘Shut Up and Write’ Honesty Commission he is found to be dallying and using Fabian Tactics in his pursuit of good writing practices, his Shut Up and Write Badge of Honor will be duly rescinded.

Brenda Corey Dunne, AKA @overdunne on Twitter, has performed above and beyond the call of duty in her efforts to tell me to Shut Up and Write at every opportunity, and for that I am miffed, but grateful.

Honorable Mentions go to Layna Pimentel, Natasha Hollerup, and Katherine Grubb, who are intent on becoming weekly SUAW members. Ladies, you are always welcome to Shut Up and Write!
Thanks for playing, and have a great Sunday.
Posted by TheWritersDen at 12:36 PM