"I always write a good first line, but I have trouble in writing the others." ~ Moliere 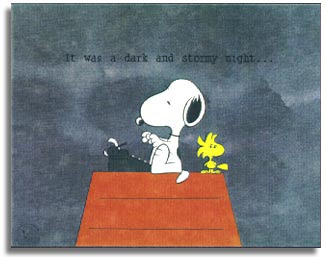 Every time I start a story or a novel I always recall that famous opener in John Steinbeck's The Grapes of Wrath:

"To the red country and part of the gray country of Oklahoma, the last rains came gently, and they did not cut the scarred earth."

At once a beautiful and ominous line, it sets the tone of the story completely. Why do I recall it in this context? Truthfully, I've always wanted to write an opening line as devastatingly lovely as the one in Grapes of Wrath. Like a lot of us, I usually don't succeed!

Perusing some of the better opening lines of famous novels gave me a sense of what a successful one is. Here's a compilation of some great opening gambits in Literature (Please, If I missed an obvious one, let me know and I'll add it!)


❝There was a boy called Eustace Clarence Scrubb, and he almost deserved it.❞ ༺༻ The Voyage of the Dawn Treader (1952), C. S. Lewis


❝Ships at a distance have every man's wish on board.❞ ༺༻ Their Eyes Were Watching God (1937), Zora Neale Hurston


❝There is a lovely road that runs from Ixopo into the hills. These hills are grass-covered and rolling, and they are lovely beyond any singing of it.❞ ༺༻ Cry, the Beloved Country (1948) Alan Paton


❝James Bond, with two double bourbons inside him, sat in the final departure lounge of Miami Airport and thought about life and death.❞ ༺༻ Goldfinger (1959), Ian Fleming


❝Once there were four children whose names were Peter, Susan, Edmund and Lucy. This story is about something that happened to them when they were sent away from London during the war because of the air-raids.❞ ༺༻ The Lion, the Witch and the Wardrobe (1950), C.S. Lewis


❝On they went, singing 'Eternal Memory', and whenever they stopped, the sound of their feet, the horses and the gusts of wind seemed to carry on their singing.❞ ༺༻ Doctor Zhivago (1957), Boris Pasternak

❝In a hole in the ground there lived a hobbit. Not a nasty, dirty, wet hole, filled with the ends of worms and an oozy smell, nor yet a dry, bare, sandy hole with nothing in it to sit down on or to eat: it was a hobbit-hole, and that means comfort.❞ ༺༻ The Hobbit (1937), J.R.R. Tolkien

❝The year 1866 was signalized by a remarkable incident, a mysterious and inexplicable phenomenon, which doubtless no one has yet forgotten.❞ ༺༻ Twenty Thousand Leagues Under the Sea (1870), Jules Verne


❝A few miles south of Soledad, the Salinas River drops in close to the hillside bank and runs deep and green.❞ ༺༻ Of Mice and Men (1937), John Steinbeck


❝At ten minutes to three in the morning, the city of wells lay inert, hot and stagnant.❞ ༺༻ In The Heat of the Night


❝No one would have believed, in the last years of the nineteenth century, that this world was being watched keenly and closely by intelligences greater than man's and yet as mortal as his own; that as men busied themselves about their various concerns they were being scrutinized and studied, perhaps almost as narrowly as a man with a microscope might scrutinize the transient creatures that swarm and multiply in a drop of water.❞ ༺༻ The War of the Worlds (1898), H. G. Wells


❝Far out in the uncharted backwaters of the unfashionable end of the Western Spiral arm of the Galaxy lies a small unregarded yellow sun.❞ ༺༻ The Hitchhiker's Guide to the Galaxy (1979), Douglas Adams


❝As Gregor Samsa awoke one morning from uneasy dreams he found himself transformed in his bed into a gigantic insect.❞ ༺༻ The Metamorphosis (1915), Franz Kafka


❝All happy families are alike; each unhappy family is unhappy in its own way.❞ ༺༻ Anna Karenina by Leo Tolstoy


❝It was about eleven o'clock in the morning, mid October, with the sun not shining and a look of hard wet rain in the clearness of the foothills.❞ ༺༻ The Big Sleep, by Raymond Chandler


❝This is a tale of a meeting of two lonesome, skinny, fairly old white men on a planet which was dying fast.❞ ༺༻ Breakfast of Champions by Kurt Vonnegut


❝Hapscomb's Texaco sat on US 93 just north of Arnette, a pissant four-street burg about 110 miles from Houston.❞ ༺༻ The Stand, Stephen King


❝If you really want to hear about it, the first thing you'll probably want to know is where I was born, and what my lousy childhood was like, and how my parents were occupied and all before they had me, and all that David Copperfield kind of crap, but I don't feel like going into it, if you want to know the truth.❞ ༺༻ The Catcher in the Rye by J. D. Salinger.


❝We were somewhere around Barstow on the edge of the desert when the drugs began to take hold.❞ ༺༻ Fear and Loathing in Las Vegas by Hunter S. Thompson


❝Scarlett O'Hara was not beautiful, but men seldom realized it when caught by her charm as the Tarleton twins were.❞ ༺༻ Gone With The Wind by Margaret Mitchell


❝In my younger and more vulnerable years my father gave me some advice I've been turning over in my mind ever since.❞ ༺༻ The Great Gatsby by F. Scott Fitzgerald


❝There was a hand in the darkness, and it held a knife.❞ ༺༻ The Graveyard Book by Neil Gaiman


❝Mr and Mrs Dursley, of number four Privet Drive, were proud to say that they were perfectly normal, thank you very much.❞ ༺༻ Harry Potter and the Philosopher's Stone by J.K. Rowling


❝No live organism can continue for long to exist sanely under conditions of absolute reality; even larks and katydids are supposed, by some, to dream.❞ ༺༻ The Haunting of Hill House by Shirley Jackson.


❝If I am out of my mind, it's all right with me, thought Moses Herzog.❞ ༺༻ Herzog by Saul Bellow


❝The village of Holcomb stands on the high wheat plains of western Kansas, a lonesome area that other Kansans call "out there."❞ ༺༻ In Cold Blood by Truman Capote


❝Here is an account of a few years in the life of Quoyle, born in Brooklyn and raised in a shuffle of dreary upstate towns.❞ ༺༻ the Shipping News


❝Lolita, light of my life, fire of my loins. My sin, my soul.❞ ༺༻ Lolita by Vladimir Nabokov


❝When Mr. Bilbo Baggins of Bag End announced that he would shortly be celebrating his eleventy-first birthday with a party of special magnificence, there was much talk and excitement in Hobbiton.❞ ༺༻ The Lord of the Rings by J.R.R. Tolkien


❝It was inevitable: the scent of bitter almonds always reminded him of the fate of unrequited love.❞ ༺༻ Love in the Time of Cholera by Gabriel García Márquez


❝It was a bright cold day in April, and the clocks were striking thirteen.❞ ༺༻ Nineteen Eighty-Four by George Orwell.


❝I am a sick man… I am a spiteful man. I am an unpleasant man. I think my liver is diseased.❞ ༺༻ Notes from Underground by Fyodor Dostoevsky


❝I did two things on my seventy-fifth birthday. I visited my wife's grave. Then I joined the army.❞ ༺༻ Old Man's War by John Scalzi


❝It was a dark and stormy night; the rain fell in torrents — except at occasional intervals, when it was checked by a violent gust of wind which swept up the streets (for it is in London that our scene lies), rattling along the housetops, and fiercely agitating the scanty flame of the lamps that struggled against the darkness.❞ ༺༻ Paul Clifford by Edward Bulwer-Lytton


❝The drought had lasted now for ten million years, and the reign of the terrible lizards had long since ended.❞ ༺༻ 2001 - A Space Odyssey by Arthur C. Clarke.

❝It was a dark and stormy night.❞ ༺༻ A Wrinkle in Time by Madeline L'Engle

If you have any great opening lines to share, leave them in the comment section and let me know. Thanks for playing!