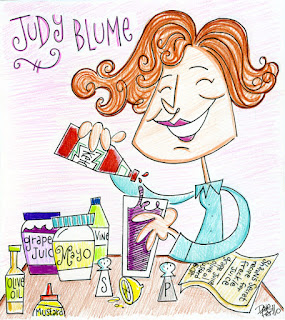 Here is an interesting article I found about writing, by one of my favorite authors, Judy Blume.  Hope you enjoy it ...

By Judy Blume || When I began to write, some people humored me. "You've always been such a dreamer!" Some discouraged me. "Do you know what the odds are ... do you know how many would-be writers there are out there?" Some were actually angry. "What makes you think you can write?"

A lot of my readers ask me for "writing tips." I wish it were that easy! There are no hard and fast rules for writing, and no secret tricks, because what works for one person doesn't always work for another. Everybody is different. That's the key to the whole business of writing - your individuality.


I once met a woman who wanted to write. She told me she'd read 72 books about writing but she still couldn't do it. I suggested that instead of reading books about writing, she read the best books she could find, the books that would inspire her to write as well as she could.
The best I can do is share with you what works for me. Good luck!

My Trusty Notebook
Before I begin to write I fill a notebook, jotting down everything that pops into my head about my characters and story—bits of dialogue, ideas for scenes, background information,descriptions of people and places, details and more details. But even with my notebook, I still don't know everything. For me, finding out is the best part of writing.


Write from the Inside
The best books come from someplace deep inside. You don't write because you want to, but because you have to. Become emotionally involved. If you don't care about your characters, your readers won't either.

Those of us who write do it because there are stories inside us burning to get out. Writing is essential to our well-being. If you're that kind of writer, never give up! If you start a story and it isn't going well, put it aside. (We're not talking about school assignments here.) You can start as many as you like because you're writing for yourself. With each story you'll learn more. One day it will all come together for you, as it did for me with Are You There God? It's Me, Margaret. I'd published two books and several short stories before Margaret, but I hadn't found my voice yet. I hadn't written from deep inside. With Margaret I found my voice and my audience.
Your Own Style
No one can teach you exactly how to write. Each person approaches creative writing differently. Every writer has his or her own method. I usually have a character or story idea inside my head for a long time (sometimes years) before I actually begin. I know where I'm starting and where I'm going but I never know what's going to happen in the middle or if the ending will be what I imagined on the day I began to write. It's the surprise that makes writing exciting for me. Other writers know everything before they begin. They make detailed outlines or have it all worked out in their heads before they put a word on paper. There is no right way or wrong way. There are a hundred different ways to tell the same story. Whatever works for you is okay.

Rewriting
Whenever I talk to kids about writing and tell them it's the rewriting I enjoy most, they groan. I guess if you're in school, rewriting means copying your papers over. But to me, rewriting is the most exciting part of the process. When I'm rewriting, I feel most creative. I've got all the pieces to the puzzle and now I get to put them together. I go through four or five drafts of each book. (When I was writing Summer Sisters I went through twenty drafts!)

Read your work aloud! This is the best advice I can give. When you read aloud you find out how much can be cut, how much is unnecessary. You hear how the story flows. And nothing teaches you as much about writing dialogue as listening to it.
Getting Published
Kids: I get so many letters asking me how you can get your work published. Don't even think about it now. Just write for yourself. If you want to share your work show it to family and friends. Some schools publish young authors' work in newsletters and magazines. Some classes are even writing and illustrating their own books. Or you can ask your librarian to help you find out which magazines accept original work from children.

Teens: A good bet is TeenInk. This is a national magazine based completely on teen generated material. Check it out.

Adults: Do your homework. Study the marketplace. Your library should have copies of Literary Market Place and Writers Market with names and addresses of editors and agents. Yes, it helps to have an agent (I didn't have one until I had already published three books). How do you get an agent? Choose a few names that sound right for you and send them samples of your work.


Rejection
For two years I received nothing but rejections. One magazine, Highlights for Children, sent a form letter with a list of possible reasons for rejection. "Does not win in competition with others," was always checked off on mine. I still can't look at a copy of Highlights without wincing.

I would go to sleep at night feeling that I'd never be published. But I'd wake up in the morning convinced I would be. Each time I sent a story or book off to a publisher, I would sit down and begin something new. I was learning more with each effort. I was determined. Determination and hard work are as important as talent.
Don't let anyone discourage you! Yes, rejection and criticism hurt. Get used to it. Even when you're published you'll have to contend with less than glowing reviews. There is no writer who hasn't suffered.
Teachers
I'm always asked if I was encouraged to write by my teachers when I was young. I can't say that I was. But writing came easily. I was a co-feature editor of the high school paper. And when I was a junior I had an English teacher, Albert Komishane, who gave us the freedom to be creative and appreciated our efforts.


Later, I took a class in writing for young people at New York University. I received professional encouragement from my teacher. When the class ended after one semester, I took it again. And before the end of the second semester a few of my stories were accepted for publication in small magazines. My teacher presented me with a red rose in class. I don't think anything is as exciting as that first acceptance, even when it brings a payment of just twenty dollars.
I wish every would-be writer could be as lucky as I was in finding a supportive teacher. Mine did not like or approve of all my work. But her criticism was presented in a positive way. She gave me the courage to try a novel instead of the rhyming picture books I was writing when I entered her class. I wrote the first draft of Iggie's' House while I was taking her course, turning in one chapter a week.
The Writing Life: Donuts
Once I begin a new book, the most important part of the process is perseverance. I try to write seven days a week, if only for an hour or two, until I have a first draft.

I'm a morning person—not the kind who rises at 4:00 a.m. and writes for hours before breakfast—but an ordinary morning person. I try to sit down to work somewhere around 9:00. I like to be dressed for the day, as if I'm going out to work, even though my office is just a few steps away. It's all part of my fantasy about having a regular job.
Once, I actually rented an office. We had just moved to New Mexico and I was having trouble getting started on a new book. I convinced myself that if I left the house each morning with the rest of the family, I would solve my problem. But the office space I rented was above a bakery and the delicious aroma of freshly baked bread and pastries drove me wild. Every day at noon I would rush downstairs to buy two glazed donuts and by three o'clock I would crave another round. After a few months and a few pounds I moved home again.
Scribbles
During the first draft of a book, which is the hardest time for me, I check my watch a lot and hope the phone will ring—anything to make the time go faster because I am determined to sit at my desk all morning. If my writing is going well, I may return to my desk after lunch to read over what I have written, to scribble on the printout, or to make notes in the little notebook I keep for each book (so that when an idea or a bit of dialogue comes to me I won't forget it).

When I'm rewriting I work much more intensely and for longer hours. Toward the end of the third draft the urge to finish is so strong that it becomes harder and harder to leave the story and return to real life. Once I'm truly finished with a book and the corrected galleys are in the publisher's hands, I feel sad. It's like having to say good-bye to a close friend. The best therapy is becoming involved with a new project. But that may take months.
Help!
For me, writing has its ups and downs. After I had written more than ten books I thought seriously about quitting. I felt I couldn't take the loneliness anymore. I thought I would rather be anything than a writer. But I've finally come to appreciate the freedom of writing. I accept the fact that it's hard and solitary work. And I worry about running out of ideas or repeating myself. So I'm always looking for new challenges.

Posted by TheWritersDen at 11:01 PM