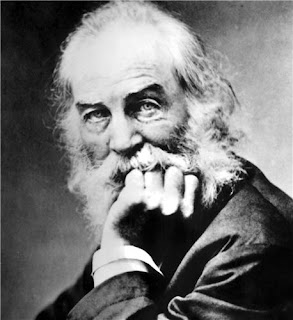 The other night Walt Whitman appeared in my bedroom. This in itself was not shocking, as writers tend to hallucinate from time to time (especially after a bottle of Johnny Walker). I stared in wonder for a few moments. Finally, I broke the silence.

“Walt Whitman? What the hell are you doing in my bedroom? Aren’t you dead?”

"Whatever satisfies the soul is truth." He said.

“Are you a ghost? Or am I just imagining you?”

“I mean, love your stuff. Leaves of Grass and all that …”

"I believe a leaf of grass is no less than the journey-work of the stars."

“Right. So, Mister Whitman, uh, what brings you by?”

“So I guess you have some things on your mind …”

"From this hour I ordain myself loos'd of limits and imaginary lines."

"O me! O life!... of the questions of these recurring;
Of the endless trains of the faithless—of cities fill’d with the foolish;
Of myself forever reproaching myself, (for who more foolish than I, and who more faithless?) …”

“Of eyes that vainly crave the light—of the objects mean—of the struggle ever renew’d; Of the poor results of all—of the plodding and sordid crowds I see around me; Of the empty and useless years of the rest—with the rest me intertwined; The question, O me! So sad, recurring—what good amid these, O me, O life? (Begins walking around the room, his ghostly specter eerily translucent)

Great. Walt Whitman (Or his ghost anyway) is having existential issues. I offer him some tea, and tell him to relax, he’s dead. But he declines.

"All goes onward and outward, nothing collapses,
and to die is different from what any one supposed, and luckier."

“Walt, you gotta relax. Too bad you died two hundred years ago, you missed the advent of Playboy magazine, great articles,” I say, tossing the magazine at him, an October, 1988 issue by the way. It goes through him and lands on the floor.

"The dirtiest book of all is the expurgated book."

"O CAPTAIN! My Captain! Our fearful trip is done,
the ship has weather'd every rack, the prize we sought is won …”

Oh great, he’s ranting again. “Mister Walt? You got any useful advice for a struggling writer such as myself? You being a legendary poet and all …”

"A writer can do nothing for men more necessary, satisfying, than just simply to reveal to them the infinite possibility of their own souls."

“Right …” I say, feigning a yawn, “Listen Whitman, I need some sleep, dude. Can you come back some other time? It’s 3 AM in the damn morning and …”

"To me, every hour of the day and night is an unspeakably perfect miracle."

"I henceforth tread the world, chaste, temperate, an early riser, a steady grower."

“Could you tread somewhere else and come back tomorrow?” I say, picking up my alarm clock to show him the time, even though he doesn’t know what it is.

He finally heads for the door, which makes no sense because he’s a spirit, ethereal. He’s still yapping as he does this.

"For we cannot tarry here, we must march my darlings, we must bear the brunt of danger, we, the youthful sinewy races, all the rest on us depend, Pioneers! O pioneers! “, he cries, before disappearing through the wall next to the door.

Relieved that he’s gone, I nestle back into my bed and try to get back to sleep. I toss and turn for a few minutes, but the big fat image of Walt Whitman haunts my mind. Just as I start getting sleepy, he sticks his head back into the room.

"But where is what I started for so long ago? And why is it yet unfound?" he yells, his barbaric yops sounding off the walls in a great big echo.

“Get lost!” I say, tossing a copy of “The Di Vinci Code” across the room at him.

"You will hardly know who I am or what I mean" he says, and evaporates.

I can’t sleep after this, so I go to the kitchen and pour out all my bottles of booze. I warm up a glass of milk and grab a package of Oreo cookies and eat half the bag. Finally I get dozy, stagger back to bed.

When I get back to my room, William Shakespeare is standing at the foot of my bed …
As he recites parts of King Lear, I drift off to sleep.
Posted by TheWritersDen at 9:48 PM